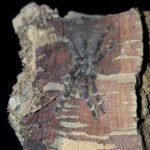 They originate from India, require temperatures between 24-28°c and the humidity to be kept around 65-70%

Females can grow to a leg span of up to 18cm, with the males maturing at a smaller size, thus making them one of the largest arboreal tarantulas available

They are one of the hardiest Poecilotheria, and are also one of the easiest to breed, making them a popular choice for hobbyists.

As with all poecilotheria genus, this species is considered suitable for advanced keepers, due to the potency of their venom, their speed, and the likelihood of a bite when they feel threatened, however, regalis is considered to be the calmest species from the genus.

Regalis have, in the past, been considered to be communal, whether natural or forced is personal opinion, and further research should be done before attempting to cohabit this species

This species are great display animals, set up in a nice tall enclosure with a cork bark tube as a centre piece, making themselves visible most in the late evening time